While the Nordic curl has been shown to be an effective exercise for increasing hamstring strength, it is not without its critics. Some players dislike it because it is very hard to do. Others are discouraged because they don’t have enough hamstring strength to perform both the eccentric and concentric portions of the exercise. An effective way to alleviate these concerns and ensure safe, consistent progress is to divide the exercise into three, progressive training phases. 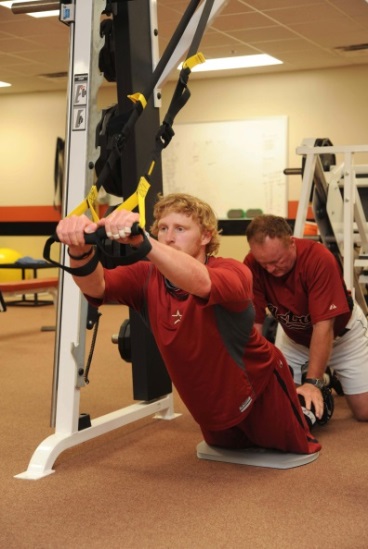 Phase I. Players lacking sufficient hamstring strength to perform both the eccentric and concentric movements in the exercise can use a TRX device to perform only eccentric contractions. The exercise starts with the player in the up position and holding the handles of a TRX device. While a partner holds his ankles, the player sets his abs and then uses his hamstrings to slowly lower his body as far as possible. The TRX allows the player to use his upper body and core strength to assist the hamstrings as he slowly lowers his body forward. Once at his lowest position, the player releases the handles one at a time and performs an explosive push-up to return to the starting position. Using the TRX allows players to gradually increase eccentric hamstring strength over a progressively larger ROM. Start with 2 sets of 4 and progress to 4×8. 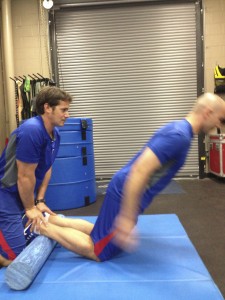 Phase III. This is a true Nordic curl using both eccentric and concentric contractions. With a partner holding his ankles, the player performs an eccentric contraction to lower himself forward as far as comfortable and then performs a concentric contraction to return to the starting position. If the hamstrings fail at any point during the eccentric portion of this movement, extend the arms to catch the body and then perform an explosive push-up to return to the starting position. Start with 1 set of 4 and progress to 4×4. Coaching keys. Keep the core tight and hips extended so there is a straight line from the ear to the knee. Lean forward from the hips and eccentrically contract the hamstrings to resist the body from lowering for as long as possible. Place a foam pad under the knees and a foam roller under the ankles to reduce stress on the knees, feet and ankles. Getting a Grip on Pull-Ups By Mike Lidge