The Moving Plank for Core Stability The Moving Plank for Core Stability

For years, athletes and strength coaches both within and outside the sport of baseball believed that the best way to increase core strength and reduce the risk of low back injuries was to perform multiple sets and reps of exercises in which the athlete flexed and/or rotated the lumbar spine. Now, due in part, to the work of Stuart McGill, Shirley Sharman and Gray Cook, we know that the lumbar range of motion that we were trying to create with sit-ups, crunches, cross-crunches, bicycles, etc., is potentially dangerous. Their research indicates that core stability, i.e., the ability to resist or prevent rotation is more important than the ability to create motion. It tells us that we should train the muscles of the core to prevent motion in the lumbar spine in both the sagittal and frontal planes. Most authorities in the field believe that core training should start with exercises designed to prevent extension (planks) and prevent rotation (chops and lifts). 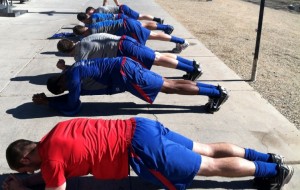 While there are numerous exercises that will prevent extension and rotation, it is important that these be performed in a particular order or progression because one exercise builds on the other. The first exercise in most progressions is the prone plank. The exercise described in this paper, moving plank, is a step-two, anti-extension exercise that can be used to bridge the gap between front planks and stability ball /ab wheel rollouts.

The exercise starts just like a prone plank; elbows are bent and forearms are flat on the floor. The palms can either rest on the floor or they can be together with the fingers interlaced. The elbows and toes hold the body up off the floor. The back is flat, abs are tight and the body is completely straight. Hold this position for 5 seconds and then start moving in the following sequence: 1) move the body forward and backward (sawing motion) rocking forward and backward from elbows and toes for 5 reps; 2) move the body side-to-side (lateral sawing motion) from the elbows and toes for 5 reps; 3) circle the entire body to the right (stir the pot) moving from the elbows and toes for 5 reps; 4) circle the entire body to the left (stir the pot) for 5 reps; 5) protract and retract the scapula for 5 reps while keeping the body straight; 6) hold the up position for 5 seconds. Keep the body straight throughout. Do not let abs sag or butt point up in the air. Add one rep per week to a max of 10 reps or 10 seconds at each position and then progress to SB roll-outs before attempting to perform ab wheel rollouts.