Side Plank with Hip Abduction Side Plank with Hip Abduction

We know that improving hip strength and stability are important parts of most corrective exercise and general training programs. With limited time for training sessions, it’s important to know which exercises produce the highest muscle recruitment. We know, for example, that: 1) performing side planks with hip abduction will strengthen the gluteus medius; and 2) improving hip abductor strength will prevent valgus collapse at the knee, improve frontal plane hip stability, prevent IT Band issues, reduce anterior knee pain and decrease the risk of ACL injury. What we don’t know, is if it is better to do side planks with hip abduction with the dominant leg down (body weight supported by the dominant leg) or with the dominant leg up (body weight supported by the non-dominant leg? 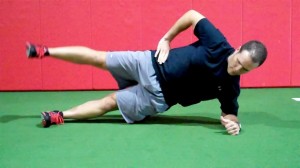 Execution: Position the body in a traditional side plank set-up with the supporting elbow under the shoulder and the legs aligned one on top of the other. While maintaining a side plank, slowly lift and lower (abduct and adduct) the top leg up and down while keeping a neutral alignment between the shoulders, spine, hips, knees and ankles. 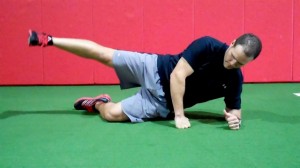 Regression: Individuals who are unable to perform this exercise from a full side plank position can modify the activity by bending the bottom leg to 450 and using the top hand to provide support as needed prior to progressing to the straight leg version. What Makes the Front Squat Different from the Back Squat? Michael Sadler, CSCS – Seattle Mariners Because research indicates that squats improve strength, speed...