By Gene Coleman and Loren Landow

Core training has become the norm in most professional baseball training programs during the past decade, and there is an abundance of core training equipment and core training programs each claiming to be the “best” way to train the core, enhance performance and reduce the risk of injury. Equipment and programs exist to stabilize the core by preventing flexion, lateral flexion, extension and/or rotation. There also exit procedures to improve core mobility by increasing flexion, lateral flexion, extension and/or rotation. While most of these programs have some degree of effectiveness, all utilize some form of preplanned movement, i.e., you know what action you are going to produce (mobilize) or prevent (stabilize) before the exercise begins. In the real world, however, this is not always the case.

Sports are unpredictable. In baseball, for example, you never know when an opponent will attempt to move you off the plate or take you out of a play. Collisions with bats, balls, opponents, teammates, walls, railings and the ground happen frequently without any warning. Because you don’t always know when you are going to have to react to an unplanned situation, you want to be prepared for what happens and react efficiently. As previously mentioned, in most of the core exercises that we are familiar with, the moves are preplanned. We are instructed to perform a specific movement, and go through it without interference. While this type of exercise will increase core strength, it won’t necessarily prepare the body for any unforeseen collisions, impacts or extreme adjustments in movement.

Is there a solution for these unplanned problems? Yes, perturbation training. Perturbation, by definition, is the application of random external forces applied to the body during an exercise, usually by a partner. While traditional core exercises are designed to target the larger global muscles that produce movement in the core and trunk, perturbation exercises help train the central nervous system to reflexively turn on the smaller local muscles to stabilize the spine when sudden disturbances occur. Perturbation exercises encourage a reflex contraction of the deep muscles of the core to produce segmental stabilization of the spine under conditions similar to those experienced in game and practice situations. Increasing core stability will, in turn, help protect the spine, prevent injuries and provide the proximal stiffness needed to enhance distal mobility of the limbs. 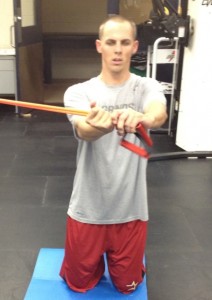 How to do it: Start by anchoring one end of an exercise band or elastic tubing to a stable base. Then assume a tall-kneeling position far enough from the anchor point that there is sufficient tension in the band. Keeping the back straight and head and trunk up, set the abs and pull the band across the body and against the chest with both hands. This is the starting position. Next, extend the arms fully and hold tension on the band without rotating the trunk for 5-10 seconds as a partner slowly applies perturbation forces from different angles to the band. Flex the arms, return the hands to the chest and rest for 5-10 seconds. This is one rep. Start with 5 reps on each side and gradually progress to 10.

Variety: To make the exercise more difficult and increase the stability and balance demands of the body, repeat the exercise from a half-kneeling, standing and lunge position. This exercise can also be performed using a cross-cable machine or stability ball. To see an example of a perturbation exercise using a stability ball, watch the previously video, “Perturbation Exercises: Reactive Core Training”.

Coaching points: Keep the trunk upright and core tight throughout the exercise. Make sure that your partner constantly changes the direction of the force to prevent guessing and applies the force long enough for the core muscles to respond and adapt. Remember, the goal of this exercise is to train the core muscles to be reactive.
__
Gene Coleman, Ed. D., RSCC-E, FACSM, was the Head S&C Coach for the Houston Astros from 1978-2012 and  strength and conditioning consultant for the Texas Rangers from 2013-2020. He is Professor Emeritous in the Exercise and Health Sciences Program at the University of Houston – Clear Lake and website education manager for baseballstrength.org.

OlderPersonal Responsibility – Where is it?
NewerFront Plank with Hip Extension