Personal Responsibility – Where is it? Personal Responsibility – Where is it?

A few years ago, the Astros’ staff was invited to spend an off-day in New York at the U.S. Military Academy at West Point. I have to say that this was one of the most enjoyable experiences that I have ever had during my 35+ years in MLB. We spent approximately six hours at West Point. We had an extensive tour of the facilities and met with the Superintendent (President), Commandant, Academic Dean, Athletic Director and Baseball Coach. We ate lunch with the Cadets, attended baseball practice and even went to class with the Cadets. Throughout the day we kept hearing a re-occurring phrase – “Personal Responsibility”. The cadets are required to be personally responsible for every aspect of their daily, academic and professional life.

On the ride back to the hotel, we began talking about how many of today’s athletes don’t accept personal responsibility for their actions both on and off the field. We talked about the excuses that we have heard – “it’s too hot to run”, I’m too tired to lift”, “my back is too sore to take extra BP”, “my family is on this trip so I can’t show up for early work”, and the list goes on. A few days later my friend, Bobby Simpson, sent me a copy of his Higher Ground Newsletter which contained an article on Personal Responsibility in which he said, “Personal responsibility is something that we preach, but don’t always get from our athletes”. Bobby made some good points in his article. Please take time to read them in the following paragraphs. – Gene Coleman

A number of years ago, I was sitting in the stands at South Commons Stadium in Columbus, Georgia, watching the SEC Tournament. Up walked Carie Dever-Boaz, a good friend who, at the time, was the Head Coach at the University of Arkansas. As we were sharing solutions to world problems, I asked her “What is the biggest problem in coaching college softball.” In less time than it takes to blink, she answered, “lack of personal responsibility.”

That answer somewhat shocked me, and I do not shock too easy. I didn’t expect the coach of one of that year’s top SEC teams to provide that answer. But, she was right. She said that players, even those at the highest level, have difficulty accepting personal responsibility. Maybe, we could rephrase this concept at some level to include ingredients like effective decision-making, commitment, or work ethic, but Carie’s words actually say it pretty accurately. I have since found her statement to be true on the softball field, in the classroom and throughout society. Maybe I knew it was true beforehand, but, if so, her statement created a heightened awareness.
Since that day, I have strongly emphasized this concept in my instruction. It is a philosophy based on long-term benefits versus short-term results. I imagine that dictating what players should do may often have better immediate results, but I prefer the slow, sometimes tortuous teaching of personal responsibility. Once accomplished, look out, for we have then developed a powerful, flexible, effective person who can succeed in almost any situation when the odds are decent. It is a challenge to help players develop personal responsibility, but it is rewarding when it is accomplished. Some coaches don’t want to believe it, but most players are more successful when they are held accountable for their actions than when they are totally dependent on us as coaches. 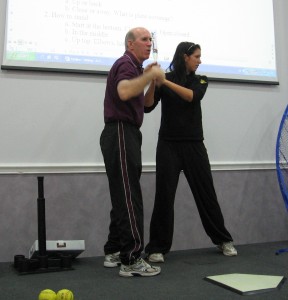 In a nutshell, put players in training situations where they have to make decisions. Provide initial decision-making techniques, develop drills that require quick choices, allow players to make a choice, and then analyze those choices. Guess what? The players will often fail. Guess what again? That’s okay. This game has failure in it and we need to learn how to deal with it.

Yield some of your authority and cast aside your ego. Personal responsibility is a vanishing quality in our game and in our society. A lot of coaches call every pitch, count every rep and dictate every move. A lot of citizens blame everything on someone else. A lot of students fail because of the teacher, or their parents, or the book, or whatever else they can find to blame it on. Share some authority. Share some responsibility; better yet, adjust your training philosophy so that players can learn how to accept personal responsibility and make better choices in real time, real life and real game situations. – Bobby Simpson

___
Bobby Simpson is the Founder and CEO of Higher Ground Softball Instruction. For additional information on Higher Ground see http://www.highergroundsoftball.com Control What You Can Control – Jennie Finch

YOUTH SPORTS  “IF YOU DREAM BIG AND BELIEVE IN YOURSELF, YOU NEVER KNOW WHERE YOU WILL END UP “ Advice from Jennie Finch to softball players of all... Sports Psychology: Dealing with the Perfectionist Youth Sports Five Simple Guidelines for Positive Coaching By Alan Goldberg, Ph. D. In an attempt to better serve the coaches, players and parents involved in...