Baseball is an anaerobic sport that relies primarily on the ATP-PC system to provide energy for the short bursts of high-intensity, explosive movements that occur in game situations. Most plays last for 5 seconds or less. The average Major League pitcher, for example, takes 1.3 to 1.5 seconds to get the ball to the plate from a full windup and 1.0 to 1.3 seconds from the stretch. Catchers take approximately 2 seconds to get it to second base, successful stolen base attempts take 3.3 seconds or less and most runners can go first to third and second to home in 7 seconds or less. Most batters go from home to first in 4.35 to 4.45 seconds when running all-out. Ground balls take 2 seconds or less to reach an infielder and are thrown across the diamond in less than 2.5 seconds. Most fly balls are in the air for 3 to 5 seconds. Good outfielders take 1.1 seconds or less to release the ball once it touches the glove, others take about 1.5 seconds. Once released, balls thrown from the outfield are in the air for 6 seconds or less.

Baseball is an explosive game so you have to train explosively. But it’s also a sport that takes 3 to 4 hours to complete a game and 162-games to complete a season. Successful performance therefore also requires at least a moderate degree of aerobic fitness to allow players to generate and maintain power output during repeated high-intensity efforts, to recover quickly between plays and innings and to recover completely between games. 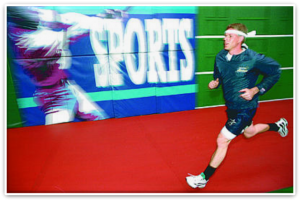 Baseball requires both a sound anaerobic and aerobic energy base, but which system do you train and when do you train it? You have to train both systems, but you have to prioritize you efforts. You can’t train both systems at the same time and get the results you want when you need them. As the old saying goes, “If you chase two rabbits, both will escape.” Use the off-season to develop a sound aerobic base, but don’t train like a distance runner. Baseball does not require a high aerobic capacity. The average aerobic capacity among MLB players is 50 ml/kg/min, just enough to fuel a 7:00 minute mile and significantly less than that (70-80 ml/kg/min) to be a successful distance runner.

Use the off-season to get in shape to run. Start with tempo runs, i.e. stride 100 yards at 75-85%, walk back and run again to prepare the body for the more intensive intervals to follow. Use time as an index of intensity. Most position players should be able to run repeat 100s in 18-20 seconds. Catchers and other heavier players should be able to run 100 yards in 20-24 seconds. Start with 8-10×100 yards and gradually progress to 14×100. Train three times per week on alternate days and substitute a day of cardio (jog, treadmill, bike or elliptical) when needed. Limit cardio work to 20-30 minutes per session. Sustained longer runs utilize the wrong energy system, develop the wrong muscle fiber types and increase the production of cortisol, a catabolic hormone that can increase protein degradation and reduce lean body mass, strength and power. Use non-conditioning days to introduce drills to improve and reinforce proper running mechanics. Good mechanics will improve efficiency and prevent energy leaks during running workouts. Regardless of how big, strong and powerful you are, you will run only as fast as your mechanics permit. Once running mechanics break down additional increases in running speed and efficiency are impossible.

Add shuttle runs in the pre-season to improve anaerobic capacity, enhance anaerobic power and prepare the body to accelerate, decelerate and change directions. Since injuries in game situations are most often associated with musculo-tendinous stress and strain caused by speeding up, slowing down and changing directions, it is imperative that players perform these movements a sufficient number of times during conditioning sessions prior to having to perform them in spring training and regular season games.

Start with 2-3×150 yard shuttles in 25-30 seconds over a 50-yard course with a one-minute rest between reps. Progress to 6×150 and then shorten the course to 25 yards to increase the intensity and number of starts and stops within the 150 yard course. For additional gains, lengthen the course to 300 yards. Start with 2-3×300 over a 50-yard course and gradually progress to 6×300 over a 25-yard course. Increase recovery time between reps to 75-90 seconds for 300-yard shuttles. Perform ground-based shuttles one to two times per week and bike or elliptical intervals once per week to facilitate recovery from intense ground-based training. Double the length of non-ground-based intervals. If, for example, you are doing 3×150 yard shuttles in 30 seconds, do three 60-second bike or elliptical sprints with 60-90 seconds recovery between sprints.

Introduce agility, acceleration and speed work on non-conditioning days. Since most offensive injuries occur on the base paths, have players run the bases at least once per week during the three weeks leading up to the start of spring training to help prepare them for the demands of the game. Keep spring training and in-season work relatively short doing sport-specific sprints, shuttles and intervals.

Use your time wisely. Train smarter, not longer. Prioritize your training. Develop the energy system you need when you need it. Running short sprints in November won’t develop an aerobic base and jogging in March won’t make you quicker to the ball in April. “If you spend 80% of your training time jogging, you’re spending 80% of your time practicing to be slow.” It’s important to train both energy systems, but not at the same time. Shift the focus at different times of the year to maximize performance.

__
Gene Coleman, Ed. D., RSCC-E, FACSM, was the Head S&C Coach for the Houston Astros from 1978-2012 and is currently a strength and conditioning consultant for the Texas Rangers and Professor in the Exercise and Health Sciences Program at the University of Houston – Clear Lake. Your Arms Control Your Legs in Acceleration and Top Speed

Your Arms Control Your Legs in Acceleration and Top Speed By Gene Coleman, Ed. D., RSCC*E When accelerating and sprinting at top speed, your arms and your legs...