By Gene Coleman and Jose Vazquez

The hamstrings are active at both the knee and hip during running. The primary function at the knee is eccentric flexion to decelerate knee extension prior to foot contact. The primary actions at the hip are concentric extension and hyperextension to propel the body forward. Flexion at the knee is critical at certain phases of the sprint cycle and less important at others. During the recovery phase of sprinting, for example, as the lead leg is swung forward, the hamstrings contract eccentrically to keep the knee bent to approximately 900. This action by the hamstrings prevents the knee from over extending which will, in turn, cause the runner to land with his foot too far in front of his body, i.e., overstride. Overstriding has been shown to increase stress on the hamstrings, increase the risk of injury and reduce running speed. 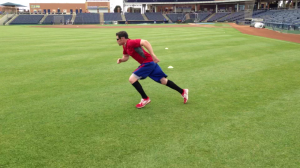 As soon as the lead foot hits the ground (foot contact), the primary function of hamstrings switches from eccentric flexion of the knee to concentric extension of the hip. The transition from knee flexion to hip extension is not immediate. There is no an on-off switch for the hamstrings during the sprint cycle. Eccentric knee flexion continues to a small degree at the lower end of the hamstrings, just after foot contact, but lasts for only a moment. As the center of mass moves over the foot (stance phase) the upper portions of the hamstrings contract concentrically to help extend the hip and continue the forward motion of the body (drive phase).

The hamstrings continue to extend the hip during the drive phase to help the glutes propel the body forward and eventually enter a state of hyperextension as the foot moves behind the mass of the body. Hyperextension at the hip helps the runner achieve maximal leg drive and power. At toe-off, the foot exits the ground and the sprint cycle repeats itself for the duration of the sprint. Proper hamstring and hip development through the full range of the sprint cycle are essential for fast, injury-free sprinting performance.

Hip training can be divided into two general movement categories (bent-knee and straight-knee exercises), and three specific movement categories (short, medium and long length muscle exercises). Effective hip and hamstring training requires the performance of both bent-knee and straight-knee exercises because each position allows either the glutes or the hamstrings to receive more of the training load and both the glutes and hamstrings need to be as strong as possible. Bent‐knee hip work targets the glutes more due to the principle of “active insufficiency.” When the muscle is shortened to the point that it can’t generate or maintain active tension, active insufficiency is reached. With the knee bent, the hamstrings are shortened at the knee so they are not as strong at the hip. By default, the glutes have to work harder to move the load. Keeping the knee straight, removes most of the slack at the knee joint and puts more strain on the hamstrings and less on the glutes. Bent- and straight-knee exercises are essential to maximize hamstring and glute development throughout the hip region.

___
Gene Coleman was the Head S&C Coach for the Houston Astros from 1978-2012 and strength and conditioning consultant for the Texas Rangers from 2013-2020. He is Professor Emeritus in the Fitness and Human Performance Program at the University of Houston – Clear Lake and website education manager for baseballstrength.org.  Jose Vazquez is Head Strength and Conditioning Coach, Texas Rangers