It is always preferable to include exercises that activate the gluteus maximus and medius in training programs. Research has shown that poor hip activation/control leads to frontal plane knee collapse and may lead to excessive strain on the knee.

In a previous posting, I discussed the side plank with hip abduction as an excellent choice for the gluteus medius based on EMG activation. This article will discuss the front plank with hip extension based on muscle activation findings by Boren, et. al. (1).

Boren and his team of researchers used surface EMGs to determine the extent to which various rehab exercises activated the gluteus medius and maximus muscles. Their data showed that the top two exercises for activation of the gluteus medius and maximus as indicated by percentage of maximal voluntary muscle contraction (MVIC) were 1) front plank with hip extension; 2) gluteal squeeze; 3) side plank with dominant leg; 4) side plane with non-dominant leg and 5) single leg squat. The front plank with hip extension was the number one exercise by far, eliciting a 106% MVIC. The gluteal squeeze was a distant second with an 80% MVIC.

Execution: Begin in prone plank position with the trunk, hips, and knees in neutral alignment. Next, lift the left leg off of the ground, flex the knee of the left leg, and extend the hip past neutral hip alignment by bringing the heel toward the ceiling. Hold for one second at the top and then return to parallel for one second. This is one rep. Perform 5-10 times reps and then repeat on the right leg. 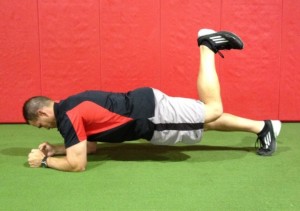 Application: This exercise is designed to strengthen the gluteus maximus in hip extension which, in turn, will improve dynamic hip stability, reduce unwanted strain on the knee and help increase core stability and strength.