The Problem: Treating a compound fracture conservatively with a Band-Aid instead of just putting him on the operating table and getting to the heart of the matter.

The Band-Aid Coach: “Player A can’t squat! I guess we’ll remove squats from his program.”

The Surgery Coach: “Player A can’t squat! Let’s find out WHY he can’t squat. Squatting is a fundamental movement pattern of all human beings. If he can’t squat efficiently in the weight room, it means that he will most likely have trouble doing it on the field and during running, jumping and throwing motions.

What is NOT in This Article: A tutorial on how to remove the use of heavy weight, barbells for squatting.

What IS in This Article: A suggestion of how to correct movement while simultaneously making athletes stronger.

The Importance of Assessing Movement: Players don’t just get struck by lightning when an injury occurs. Of course there are always unforeseen accidents, such as, getting taken out at the plate, a liner at the face and actual instances of people getting struck by lightning (that actually happened to a baseball player(1). Outside of the previously mentioned instances, there is invariably a reason why a specific player got hurt. It could be many things. For example, maybe the player has not been working out; has been working out too much; has been performing the wrong exercises in his workouts; or has been doing something off the field that is hindering recovery. In my opinion, it’s a recipe with many ingredients some of which are most likely observable in the weight room.

During the off season, I took a trip to Lawrence, Kansas to chat with one of the best strength and conditioning coaches in the field, Andrea Hudy. When I asked Coach Hudy if she performs a movement screen with her players, she said yes. “I observe every exercise and every rep.” Her response hit the nail on the head.

If you are watching a player do lunges and the left side looks athletic while the right side looks like Betty White is completing the rep, there MIGHT be a problem. If you are watching a player complete his squat and his heels consistently come off the ground even after queueing him to sit back and drive through his mid-foot, there MIGHT be a problem. Take Away: Don’t ignore the obvious.

The Common Mistake: On more than one occasion, I have heard coaches say “I don’t let pitchers perform back squats because many of them don’t have the shoulder mobility to put their hands on the bar in the right position without it hurting their shoulder.” To me, that’s like saying, “I don’t have my pitchers pitch because they get this REALLY sharp pain in their elbow every time they do it!” Both situations are indicators that there is something wrong that is affecting their health and performance. The difference is, in the second situation, it can’t be ignored, because they have to pitch. It’s their livelihood. Squatting isn’t their livelihood, but we shouldn’t ignore the fact that there is something wrong.

The Solution: Don’t get me wrong. If there is a major issue, we use safety bars, trap bars and sometimes even removing a player from the squat all together to avoid that issue. The difference is, if we are going to take someone off of a movement, it means we are going to attack the heart of the issue. Not just remove squatting to hide the fact that there is an issue to begin with.

Case Study: Player A is a 23 year-old pitcher who throws 95, is strong as an ox and moves like a cinderblock on stilts. The coach says that he “just can’t lengthen out his stride on the mound.”

Program considerations: He most likely doesn’t need to get ‘stronger’ in the conventional sense. He has a forward head posture and extremely internally rotated shoulders. Sitting into a chair is difficult for him because he just plops to the bottom like an 80-year old woman. He also has difficulty externally rotating at the hip because of weak glutes and tight adductors.

In this case, we might remove him completely from a conventional lifting program for 3-4 weeks to see if we can improve some of his mobility and strengthen him in a different way – through moving correctly through a full range of motion. Chances are he has not been in a full depth squat position since he was 3 years old, so we’ll see how close we can get to him doing a perfect parallel (Or below parallel) squat with body weight before loading the movement again. If we take him off of a conventional lifting program, it doesn’t take long to see drastic results. When he can squat correctly, we re-integrate him into ‘normal’ lifting and continue coaching him aggressively with light resistance to ensure that he is getting into the right position using the right muscle groups. Within 1-2 months, he should be a different athlete and less of a cinderblock.

Results: The following photos were taken 21 days apart. We did not remove this athlete from any of his normal lifting activities.   We added full range of motion, dynamic movement involving intensive coaching on how to utilize the posterior chain more effectively to improve movement. No stretching was used to achieve the results depicted in the after photos.

Before (Gray Shirt) and After (Blue Shirt) 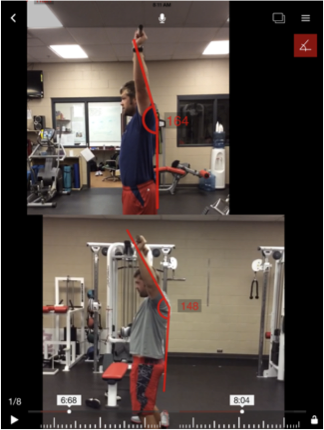 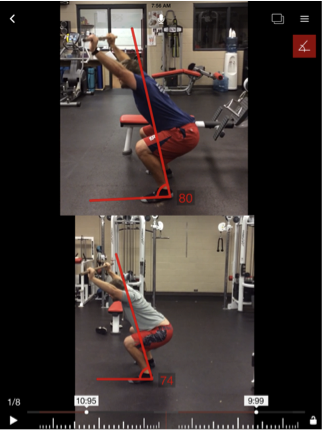 Player B is a 19 year-old outfielder who weighs 190 pounds, is 6’1” tall and is limber and free moving aside from slight hip immobility in the bottom of a squat. The coaches say he “lacks pop at the plate.” His brother plays in the NFL at 6’5” and 250 pounds.

Program considerations: He needs to increase his strength base. We know that he has the physical potential to gain significantly more strength and power based off of his genetics. The best and most efficient way to increase his strength is by progressively loading his body. His upper body is mobile, but every time he squats, he externally rotates at the hip and his heels come off the ground regardless of how much we queue him. He doesn’t have the same bad habits and joints of a tin man that player A has. We would continue him on a normal program. The difference being, we would add ‘corrective’ movements that will simultaneously enhance movement and increase strength. Yes, this IS possible. We will continue to ask him to squat because we have observed that he is limber enough to get to a low position, but he is shifting his weight into his front side. This tells me that he is lacking posterior chain strength which could also hinder his power output at the plate. We will put him on a low-box squat to encourage him to ‘sit back’ into his hips until he can do it on his own. He will also be asked to perform one-leg squats to bench, overhead squats using the wall for support, lateral lunges, hip thrusts and eccentric step ups to help strengthen his posterior chain.