A Key Exercise for a More Powerful First Step A Key Exercise for a More Powerful First Step

There many exercises performance coaches use to exploit power in training sessions, including medicine ball throws, Olympic lifts and the spectrum of Plyometrics. A well thought-out curriculum of training should have all of the aforementioned skills implemented over the course of an athlete’s career. One exercise that has been in my arsenal for years is the “double-leg box blast”. It’s a simple, but complex exercise at the same time; with many unique training factors associated.

Like all of our exercises, you first have to determine if the athlete is physically qualified to perform the exercise. That answer is entirely up to you, but my recommendation is to err on the side of being conservative. Strength, stability and coordination are underpinning qualities needed to elicit the speed /power response for this exercise.

What you will need to perform this exercise:

1. Plyometric box ranging from 4″-12″ (The box height will be determined by two factors, the height of the athlete, and relative strength of the athlete).

2. An athlete who is mature enough to take sound coaching advice.

3. A coach who is capable of communicating the intent and set up and execution

In the photo to the right, you see that I have my athlete with one foot on a 12″ box and the other foot on the floor. If you turn this picture sideways, the athlete would look like a sprinter loading up in the blocks. The only difference is, we are going vertically on the plyometric box and a sprinter would be moving more horizontally. 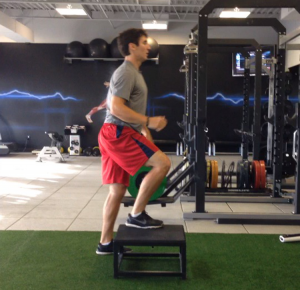 2. The down leg should be extended approximately 1800 of extension, and bear about 25% of body weight.

3. The torso is erect and the arms, bilaterally, are in the pre-loaded position of 65-750 of humeral flexion.

4. The stronger the athlete, the higher the box, and the greater the angle at the knee. Stronger athletes can work at a knee angle of slightly more than 900. 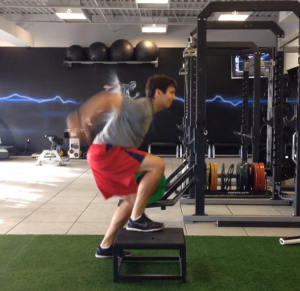 1. The athlete rapidly initiates a counter movement to further initiate the storage of elastic energy.

2. Once the athlete loads eccentrically (I call this the “fuse to the dynamite”), it is time to utilize the storage of elastic potential to produce the overcoming effect. From here, the athlete will initiate the push off both legs for greater synchronization and expression of power. The lead leg drives through a longer ROM, not unlike sprint starts out of the blocks in track. 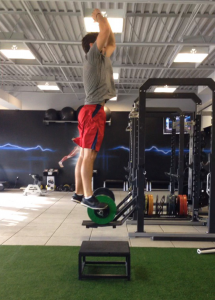 3. While finishing the push, the athlete must extend the ankle, knee and hip while finishing with both arms driving vertically straight up. The athlete must also simultaneously maintain trunk integrity to effectively drive the legs and better control the landing phase.

4. Landing is a skill in itself. The landing position should be identical to the set up position. Athletes should avoid a max effort on the jump so they can have more control and consistency of the landing position. The goal is to have both legs land simultaneously and bend into the same joint angles as they did for the counter movement action. A huge emphasis needs to be placed on deceleration and trunk integrity to avoid losing alignment and adding too much joint stress.

Sets and reps are at the coaches’ discretion, but I personally never prescribe more than 2-3 sets at 3-5 reps with rest intervals of 2-3 minutes between sets. Make sure that athletes warm-up before this exercise and/or perform it after a speed training session to avoid compromising the CNS ability and avoiding fatigue states, as injury potential is heightened.

Over time, you’ll find that adding the box blast into your arsenal of exercises will challenge your athletes’ coordination, and will allow them to express more power as synchronization and timing lead to greater efficiency!
___
Loren Landow, CSCS-D, USAW, MAT, NASM, Steadman Hawkins Athletes Performance – Denver. Three Things Can Happen When You Slide Head First and Two of them are Bad! By Gene Coleman, Ed. D., RSCC*E, FACSM Despite what doctors, athletic trainers and... A-Skips for Rhythm and Speed YOUTH SPORTS How to Make a Young Athlete Slow By Mike Boyle The PBSCCS recently received an inquiry from a mom who asked if her son should run cross country to...